The ESTA USA Visa by the US Department of Homeland Security

Run a US ESTA check or apply for a new ESTA USA Visa  here before heading out to this great and exciting city. 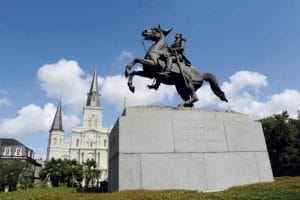 Do an ESTA check or apply for a new ESTA USA Visa before flying out to one of the most interesting cities in the United States. This city is, no doubt,  New Orleans, Louisiana. Louisiana was a French colony for over 120 years, and you can still see this influence today. New Orleans is a melting pot of French, Spanish, indigenous, and African cultures, making it very different from most other American cities. Almost ten years have gone by since Hurricane Katrina’s devastation of the city.   The city was rebuilt after the tragedy and is now full of energy and attracts tourists from around the world. The best time to visit New Orleans is during the famous carnival season which will begin on February 13th in 2018. Start planning your trip and get your ESTA to soon be able to enjoy this magnificent American city and its legendary carnival – Mardi Gras! 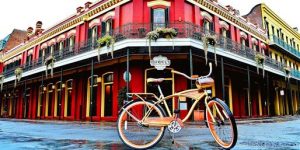 1 A visit to New Orleans can begin in the famous French Quarter. The Great New Orleans Fire of 1788 destroyed a large part of the old city, and with it, its French architecture. Accordingly, the city’s current architecture that dates back to the end of the eighteenth century is essentially Spanish colonial architecture – reflecting Spain’s dominant influence in Louisiana at that time. The majority of buildings have very attractive, ornate façades with beautiful decorations on their balconies. The French Quarter’s main street is Bourbon Street. Known for its bars and parties, Bourbon Street is the heart of the French Quarter and one of the main streets in which Mardi Gras is celebrated. During the carnival, people parade down the streets and throw colorful beaded necklaces from balconies. People wear colorful costumes and the atmosphere is full of joy and pleasure. 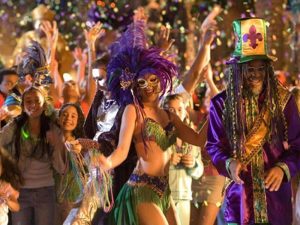 Run an ESTA check or apply for a new ESTA USA Visa here before heading out to this great and exciting city.

Click HERE to run your ESTA check on your existing permit

2 Another major attraction found in the French Quarter is Jackson Square. At the square’s center, you will find an impressive statue of President Andrew Jackson on horseback, which gives the square its name. Behind the statue, you can see the Saint Louis Cathedral, which was built in 1789 and is a very attractive white building with the best of both architectures. To the cathedral’s left is The Cabildo, originally the city hall and now a museum. The Cabildo was built between 1795 and 1799 and was the colonial seat of government in New Orleans. To the cathedral’s right is the consistory which is Presbyterian and was built in 1793 to coincide with The Cabildo. Jackson Square is a good place to take very nice pictures and to walk around.

3 Close to Jackson Square is Canal Street, one of New Orleans’ most emblematic streets. 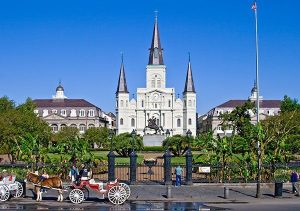 Canal Street is full of big stores, as well as houses. New Orleans’ famous tramway takes up a large portion of the street. Canal Street crosses Saint Charles St which is home to some of New Orleans’s most beautiful homes, built in an elegant and attractive style common in the South of the United States. Saint Charles also has an old tramway that takes you to the top of the street and brings you to two famous attractions in New Orleans: Audubon Park and Tulane University. 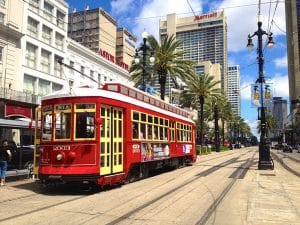 Click HERE to run your ESTA check on your existing permit

4 New Orleans is synonymous with good food and no visit to the city is complete without trying its famous creole cuisine, as well as its fresh seafood from the Gulf of Mexico. Certain famous restaurants such as Antoine’s Restaurant and Arnaud’s offer creole cuisine, and are found in the French Quarter. Some of the most famous creole dishes are Po-Boys; sandwich with roast beef, fried shrimp, oysters, catfish, or soft-shelled crab.

Another popular dish is Gumbo. This is a ragout served with okra rice, as well as seafood, chicken, or sausage. A favorite dish is always crab étouffée. They’re crabs or a sort of freshwater lobster. The dish is slow-cooked and served with rice similar to gumbo. Now, if you are looking for something sweet, eating beignets is the answer. They’re made with fried dough and covered with sugar, but without a hole in the middle like doughnuts. The most famous place to buy these is Café du Monde, to the right of Jackson Square. 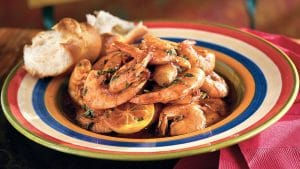 Get your ESTA USA Visa now!

Grab your ESTA USA visa now within 3 easy steps or run an ESTA check on your existing permit. No longer waiting times at the US Embassy. ESTA works 100% online and you are only a click away from applying for your ESTA Visa. The ESTA permission is usually granted within minutes but can take up to 72 hours, so apply early.

Your business trip to Seattle

Your vacation in Portland Oregon